£9.95 for Hickory's Shake Shack-inspired burger with fries and slaw. Seeing the name of NYC’s most famous burger joint got me giddy! Did it last…?

On a recent trip ‘oop north to visit university friends in Chester, I thought I’d see what the city had to offer in the way of burgers, writes Addison Capper. My borderline burger obsession was but a twinkle in my eye during my scruffy-haired, all-weather-short-wearing student heyday, so on returning to my alma mater I had a nostalgic desire to return to some old hangouts and put my subsequently-acquired expertise to work…

It was a bit of a dashing visit, so I only managed to squish down one burger. Hickory’s Smokehouse, perched on the banks of the River Dee, played host. Alas, it didn’t pay dividends.

The joint was fully booked on that particular Saturday lunchtime, not really a surprise given the tastiness of the melt-in-the-mouth smoky ribs, pulled pork and beef brisket it serves up. Without a table, my friends and I sat at the bar instead. Not a problem. Noshing burgers at the bar with a pint of Brooklyn lager? It kinda felt quite Noo Yawk. 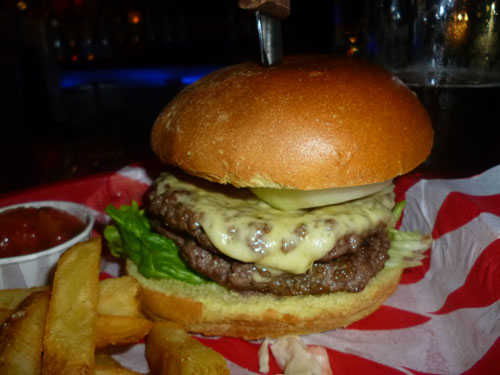 Anyway, onto the burger – there were two options. First up was the Hickory’s Burger, which featured “seasoned prime beef patties grilled medium-well with lettuce, tomato, pickle & Monterey Jack cheese”. Served with fries and slaw, a double cost £9.95 and a triple £11.95. The menu also explained that this apparent new recipe was inspired by the burgers served at legendary New York joint, Shake Shack. Having once had the pleasure of eating such a burger in Madison Square Park, this got me a pretty excited. The second option was The All American XXXL Roadhouse Burger, comprised of “two Hickory’s house made burgers with smoked bacon, BBQ pulled pork, Cajun onion rings & Monterey Jack cheese”. I’m a bit of a purist, so this seemed a bit much. And with the Shake Shack reference, I couldn’t really look past the house burger, could I?! My one modification was to ask for it to be cooked medium-rare, as opposed to its stated "medium-well". 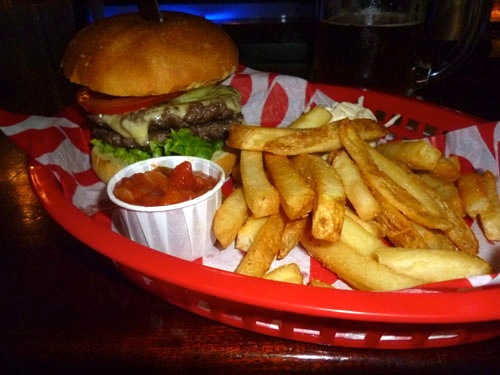 The burger arrived in a plastic basket laden with greaseproof paper and served with fries, slaw and a pot of rather sad-looking, pale tomato relish. The thickness of the patties caught my eye straight away. They were pretty thin, instilling fear that they probably weren’t the medium-rare I’d requested. A cut through later, it was apparent they weren’t.

Anyway, without getting too disheartened so soon into the meal, I cracked on. But it didn’t really get much better. Which was a disappointment and a shame as I’ve had many a good time at Hickory’s ploughing through delicious platters of BBQ meat. 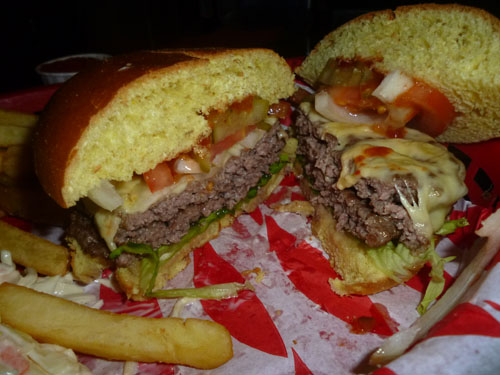 The patties still had a bit of life and juice left in them, but that was about it. They just didn’t have that depth of flavour that aged, quality cuts of beef do and it all felt a bit grainy and processed. Alongside these issues, the whole thing was just a bit bland, something a Shake Shack burger couldn't be accused of. Here there just wasn’t enough seasoning, no tang from the pickles, barely a splat of sauce. I added the tomato relish, but its lack of vibrancy and colour sadly matched its (lack of) flavour. The bun was decent enough, but bizarrely un-toasted. It had a good balance of buttery luxuriousness and delicate lightness that would have been well complimented by the crunch and char of a good grilling.

As for the burger’s accompaniments, the fries were bloody excellent, as they have been every single time that I’ve been to Hickory’s. Skin on, crunchy on the outside, fluffy in the middle little numbers. The slaw had no crunch and no zing because it was too creamy. Maybe this is a preference thing – the lighter versions that kind of give you a little vinegary smack in the chops are much more to my taste. 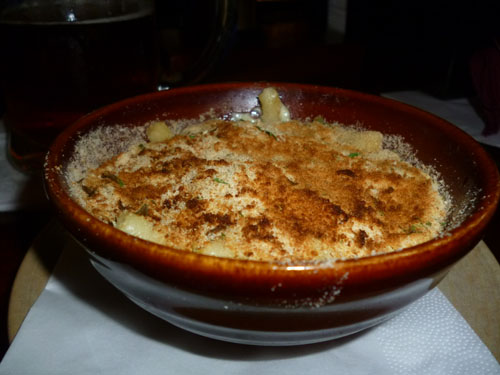 I also ordered a side of mac and cheese. What with is being a deep-south American smokehouse ‘n’ all, I hoped it’d be a cracker. That it was not. It came sprinkled with breadcrumbs, which would have been fine had they been grilled to a crisp. They hadn’t and it made for grainy eating. Thinking it’d get better deep down, I dived in, only to find more crumbs. There was little to no cheese – this is macaroni CHEESE, god dammit. A lactose intolerant could have quite happily chowed down on this – I’ve had cheesier macs out of tins (inadvisably. OK, so I was a student). This was more like eating my morning granola. Dry.

All in all, this trip had the potential to be a cracker. Perched at the bar sipping Brooklyn lager out of a handled pint jug, with a good selection of tunes and the match on the TV. A decent burger would have made it. Alas it didn’t, but good times were had – as they have been before at Hickory’s, And so my final message is yes, do go – but stick to the BBQ.

Headed up by chief inspector Burgerac (burgerac.com), a crack team of burger detectives are scouring our nation's towns and villages, even as you read, hunting high and low for delicious rural burger experiences. Midsomer Burgers is where we shall be filing all our reports.

Burgers by restaurant or rating